I started writing about the dysfunction and trauma in my family almost four years ago. My original intention was to write a novel in the tradition of Tolstoy and Faulkner with an omniscient narrator, written in third person from the perspectives of each member of my family. Ambitious, yes, I know. But I figured that if I failed, I would be much closer to what I wanted than starting out on a smaller scale. The first draft was 850 pages and it was, unsurprisingly, a complete failure. I tried to cram too much information into one story. So I rewrote it in the first person, from my perspective this time, as a teenager experiencing the events as they happened. That is what became the novel I published earlier this year, A Masque of Infamy. (On a side note, I really wanted to call the book Sucks, Alabama, which is a much catchier title, but felt like that people would perceive the book as a slam on Alabama, which it most definitely is not. While my teenage self wouldn’t have flinched at possibly alienating readers, I’ve since grown somewhat squeamish in my old age…)

While most of the first draft was scrapped, there were a few parts that I really liked. I thought the part of the story when my little brother and I were first admitted into a mental hospital while our father and Rick waited to be arrested on sodomy and child abuse charges was particularly poignant when told from all four perspectives. So I went back in, salvaged and rewrote those sections for this current version. (Although the other parts in third person, I kept mine in first person.) To get at the grist of the story, as I was writing the first draft, I interviewed my siblings and my father several times and obtained the court records from the trial. I reprinted some these documents herein, along with two of the four newspaper articles on the case that appeared in the Anniston Star. (I had to get these off microfilm stored at the local university, an arduous process that was hindered by the very short amount of time I could spend doing research in a library two thousand miles away. Fortunately, I was able to just send away from the court records, though it took a while for the clerks to find the files in the storage warehouse where they had been kept since 1987.) 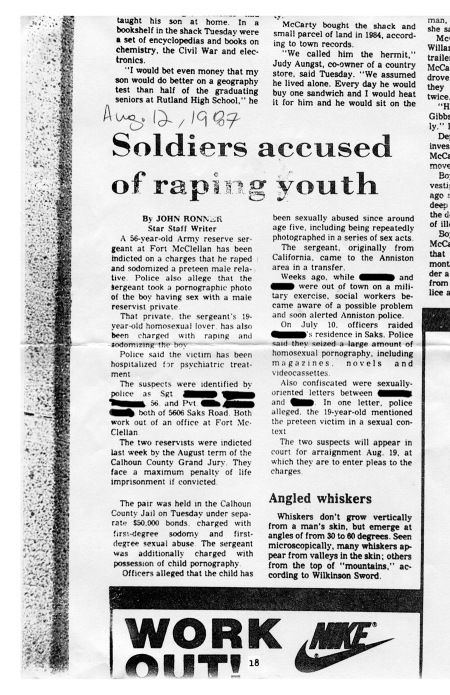 A few additional notes: There is some “creative engineering,” but only to maintain the narrative and flesh out the characters through dialogue. All names have been changed and/or redacted. Even my own. This is consistent with the novel and done to avoid any hassles with certain people (namely, my little brother) not liking what’s been written about them. (There have been threats.) So this way, I can just point out, Hey, it’s FICTION! (Even though it’s not.) It’s a NOVEL! (Only because I use dialogue and a narrative structure.) And anyway, I knew from the beginning that I didn’t want to write a memoir. (Even though, in the end, I kinda did.)

While changing names to protect the victims and innocent bystanders in this story makes sense, you might be wondering why I’d remove the names of the perpetrators? I went back and forth over that point, but decided that since they’d served their time in prison, they paid their debt to society. What they owe me, my brother and the rest of our family is debatable at this point. However, if you are really curious, click here to see what Rick looks like these days after twenty years in prison.

The INSTITUTIONALIZED story cycle is preceded by letter/comment section and an introduction cannibalized from The Nasty Oh-Dear zine (Piltdownlad #4), which, incidentally, is the prologue to the novel and, once the current issues with the silkscreened cover are gone, will no doubt go out of print.

After a few minutes, Dave said, “I think we need to start getting serious.” He reached into a briefcase and placed three spiral notebooks on the table with band names and logos scrawled into the covers.

“Hey, my notebooks!” I’d forgotten them in the rush to get out the door when the social workers picked us up.

Dave spread them out on the table and flipped through the pages. “What were you trying to express in this song, ‘Fade to Black’?”

“Yes, I see you have that written underneath. You have a whole section devoted to what you call your favorite rockers: ‘Mommy’s Little Monster,’ ‘Suicide’s An Alternative,’ ‘Annihilate This Week.’ What is it about these songs that made you want to write them out in your notebook?”

“I wanna be a songwriter, so I write out lyrics as practice. I study how the verses, bridges and choruses work together. Most of the songs in there I wrote.”

“I see that…” Dave flipped through the pages. “This is one of yours: ‘If telling you would kill you, to realize would be suicide.’ What did you mean by that?”

“It just, you know, sounded cool.”

Dave turned the page. “Here you have, ‘One of these days when I have the guts, I’m gonna jump right in front of a pick-up truck.’ Another one goes, ‘Sometimes I just wanna blow it all away. Light a fuse and watch the world go up in flames.’ That one you titled ‘Hate Bomb’.”

“They’re just songs,” I said with an awkward chuckle. “They aren’t supposed to mean anything.”

“What kind of songwriter would you be if you wrote songs that had no meaning?”

“I mean, yeah, sure… they have some meaning. But you’re reading them all wrong. I’m just trying to come up with songs that rock, you know?”

“You don’t think this subject matter reflects your true feelings?”

“No. I’m not afraid to say what I want.” I laughed to show how good-natured I was. “Look, you’re totally judging these songs based on the words. But that’s only part of it. My songs are about the music as much as the lyrics. These are just words on paper, so you have to imagine the rest of the song… the power of the music.” I reached for one of the notebooks and flipped to a particular page. “Take this song right here, ‘Prisoner of Time.’ This one I just wrote. It starts out real mellow, almost a ballad—but once the verses start, it gets fast, but not too fast. It’s still slowly building up to the bridge. Then it’s like—” I replicated the sounds of the instruments with my mouth, blowing out air rapidly through parsed lips: “Dun dundun! Dun dundun! Dun dundun! Dun dundun! Then it goes back into the verses again. But after the second bridge it keeps building to the chorus where the guitars go, Chuga chuga chuga chuga. Chuga chuga chuga chuga. The double bass kicks in and it’s getting faster…” I tapped my feet rapidly against the floor. “Then the lead guitar starts to wail.” I pantomimed playing a guitar. “Right, and then it’s like, ‘I’m a prisoner! Prisoner! Prisoner of time! And the walls! The walls! They’re all in my mind!’” I covered my mouth to replicate the background vocals. “Then it just goes totally insane, the drumbeat is all over the place as the bass follows the lead guitar: ‘Prisoner! Prisoner! Break free!’” I leaned back in the chair and folded my arms across my chest. “So you see, that song’s really about freedom, you know? I wasn’t trying to be negative or anything.”

Dave smiled at my performance. “I can see you are very enthusiastic about your music.”

Just when I thought we were getting somewhere and Dave would realize I didn’t need his help, he pushed the notebook with the plain green cover across the table. “What about this one?”

The green notebook was my journal. My mind raced as I tried to remember all the crazy stuff I’d written. I knew there were detailed descriptions of my trysts with Missy, commemorated in case I forgot any of the details. But there were also death fantasies, the pros and cons of suicide

As Dave stared at me, I didn’t know what to say. I just sat there, trying to not look crazy.

“I think we need to start talking about why you’re here,” Dave finally said.

The new girl was spread out on a chair, the scars on her arms like chaotic spider webs. When Ron called her out in group she made no attempt to hide her contempt for him, Hillcrest and the rest of us.

“Why do you feel that way?” Ron asked calmly.

“Why do you think?” She spit the words out, her ferocity like an unhinged shutter in a windstorm.

“Who are you angry with?”

“Everybody! Y’all think you can judge me, but you don’t even know who I am. So, FUCK YOU!” She stood up and kicked a table.

Those nearest moved out of her way.

Ron leapt to his feet. “This behavior is unacceptable.”

“Fuck you!” She screamed as she ran her fingers through her blonde hair, clenched her fists and pulled out two wads.

Rosie ran into the room. She and Ron grabbed the girl’s shoulders. She struggled violently in their grasp, throwing punches at Ron and clawing at Rosie’s face as they carried her down the hallway. She kicked her feet and gnashed her teeth like a feral beast. We listened to her screams until the door of the Time Out room slammed shut. After that her wail was muffled, like the ominous screech of an owl in the distance.

I looked at Alex in awe. This girl was the most exciting thing to hit the ward since Justin, the Bible eater. We were both impressed. Not only was she a total mental case, she was gorgeous.

She’d showed up a two days before. We were coming back from occupational therapy. Alex and I were charging up the stairs doing our usual routine: him growling in his best James Hetfield, “Back to the ward!” while I responded with a guttural snarl, “You will do! What I say!” And then in unison. “Back to the ward!” As we smashed through the door, we stopped in our tracks. There she was, in a Mötley Crüe shirt, standing at the nurses’ station with her head down. When she looked up through matted strands of hair, her face was feline. Alex broke the spell. “Rock and roll,” he said in his bad English accent.

On the ward, she kept to herself. In the common room she sat alone, barely registering anybody’s presence. During group she scowled and refused to participate. She marched along reluctantly through the various daily activities, never smiling or showing any reaction beyond a deathray gaze.

(Read the rest of this chapter, “Gabby The Cutter,” here.)